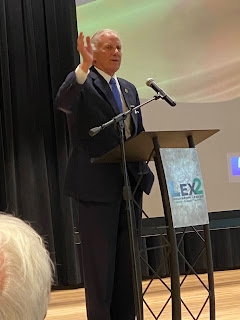 Congressman Joe Wilson was in attendance as well as several members of the South Carolina legislature and local city and county officials.

McMaster took the stage, saying he usually begins his speeches with a joke or humorous story. “The biggest joke these days is the performance of the Biden administration,” he said. “I can’t believe what I’m seeing and hearing.”

McMaster stressed the number of crises afflicting the country all at once. “It is stunning to see the revolving disasters out of Washington with this administration. Starting with the border, they want to shut everything else but keep that open. One of the things they paid the coyotes to come across the border before was people, but now they pay you to bring fentanyl. Every state is a border state now,” he said. He also touched on the situation in Afghanistan and the controversy with COVID vaccines and restrictions.

Speaking to the recent edict from the Biden administration requiring employers with more than one hundred workers to require vaccines, “Nowhere in the Constitution does it say you’ll tell every state, every town and every person that they have to get a vaccination. It’s not in the Constitution and it never will be.

“I’ve read the Constitution. It's easy to read and understand and it recognizes everything important you need to have in a government and it’s not in the Constitution anywhere, nor is the right to abort an unborn baby. We will keep on fighting, we believe in the right to life.”

Several people in the audience were quick to shout comments as the governor spoke, asking him to enforce the rules and laws as written and not let rogue municipalities and school districts run afoul of his orders and the SC Supreme Court decision against mask ordinances by individual school districts.

“As long as I’m your governor, no government will be telling your child they have to wear a mask in school if you don't want them to,” he said to loud applause.

“We’re not having vaccine passports here. We know what to do, we’ve done it well in South Carolina. The Bible, the Constitution and the Declaration of Independence, that’s all you need.”