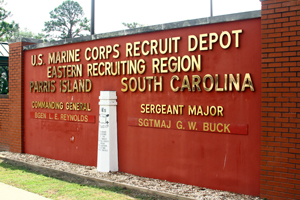 Congressman Joe Wilson (SC-02), Senior Member of the House Armed Services Committee, Congressman Ralph Norman (SC-05), and Congresswoman Nancy Mace (SC-01) introduced the Parris Island Protection Act, which prohibits the use of federal funds to close or plan the closure of the Marine Corps Recruit Depot Parris Island. This legislation is in response to reports that the U.S. Marine Corps is considering shutting its recruit training base at Parris Island, South Carolina to meet the gender integration requirements included in the Fiscal Year 2020 National Defense Authorization Act.

“I am grateful to introduce this important legislation with Congressman Ralph Norman and Congresswoman Nancy Mace, which ensures that Parris Island will not be closed,” said Congressman Wilson. “Parris Island and its facilities provide unique value to South Carolina and the Marines, and I have no doubt that it can meet the standards set forth by the Fiscal Year 2020 National Defense Authorization Act. Any proposals to close the base are misguided, especially given the facility’s significant economic impact and the thousands of jobs it provides for the State of South Carolina. I look forward to working with my colleagues in Congress and the Marine Corps to ensure that Parris Island remains open.”

“For over a century, brave men and women with spirit and determination have been molded into Marines at Parris Island. With its rich history, this base is of significant importance to South Carolina, our nation, and our military,” said Congressman Norman. “As long as I serve in Congress, I will fight to preserve Parris Island and make sure it remains the preeminent training facility for the U.S. Marine Corps.”

"Since opening over a century ago, Parris Island has served a vital role in the defense of America. Over one million brave marines have trained at the base and served our country in every conflict since World War I, including every woman who has ever served as a marine,” said Congresswoman Mace. “Parris Island is fundamental to our national defense, and I am pleased to join Congressmen Wilson and Norman to ensure it remains open to train marines for generations to come."