The billboard image was posted on a digital billboard on Highway 378 in Lexington near the intersection with Mineral Springs Road. It was a plain text billboard with white lettering on a black background with the following message:

Paid for by Lexington Mask by Choice, Not by Force - Kati McCown 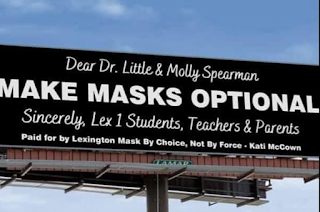 The billboard was a group effort and paid for by many individuals who are very concerned about the erosion of freedom and the dangers for children being forced to wear a mask throughout the school day.

There has been an immediate backlash from a group of teachers and parents that believe in the oppressive COVID requirements and their never-ending continuation. WIS TV did a story on this billboard situation on the Friday evening news. In the time since that story aired, the billboard company Lamar, which is the firm selected to run the message, changed the copy on the billboard without asking the people who placed the order.

In an apparent cave to the vocal few, Lamar changed the line that formerly read, “Sincerely, Lex 1 Students, Teachers and Parents” to instead read, “Sincerely, The Lexington Masks by Choice, Not Force Facebook Group.”

The advertiser agreement was for the submitted content to read as originally approved. Would a billboard company, a magazine, newspaper, radio station, television station or social media outlet ever take the step to change ad copy without the permission of the advertiser?

The organizers of the protest message plan to seek an immediate legal remedy against Lamar Advertising for changing their desired billboard content without permission.