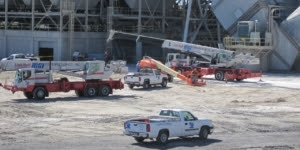 MSI is a commercial and industrial construction and maintenance company experienced in offering its services to the community since 1972. Located in West Columbia, S.C., they offer non-union, multi-craft capabilities in the mechanical, civil, fabrication, electrical and construction management fields.

Cesar Palacio has served as the Chief Operating Officer 2011. His team has had to make many changes to maintain their business at a reasonable operating level since the pandemic began in March 2020. “The challenge was adapting to new and ever-changing guidelines that varied from customer to customer” Palacio said. “Some were putting more guidelines in place than others and we had to change our internal culture to keep up. If we had one customer that required a mask and a face shield be worn at the same time and then another customer that only required a mask, it was a bit confusing for our staff to know what to do. So, ok you wear a mask. We have that across the board. We have clients on both ends of the spectrum for what’s required. Most of our guys don’t have a problem with it,” he said.

MSI is running at approximately 30 percent less than the previous year. “A lot of projects were delayed,” Palacio commented. “We’re working on projects today that we should’ve been working on last summer.”

They were able to keep the bulk of their customer base and only had one that was shut down because of COVID. “We had just finished building there and their other personnel would come from out of the country in rotating crews. Since the virus, they couldn’t keep the rotating crews since Brazil couldn’t send people here as freely as they used to, leaving the locals who hadn’t been trained well enough to run the plant on their own,” he said. Otherwise, MSI’s customers have adapted and kept moving forward.

Upward swings in the cost of materials have caused their expenses to rise. “Steel has gone up by 10%, concrete has gone up by 15%, lumber has gone up. We had no choice but to pass on cost increases to clients, but as far as labor, we’re keeping the labor costs the same, thereby sacrificing some of our expectations on the return to lower the burden,” he explained.

Safety supplies have been a challenge to find, especially masks, gloves and hand sanitizer. Palacio purchased $6,000 worth of hand sanitizer in bulk over the summer to make sure they had enough.

MSI committed to protect its workforce throughout the COVID downturn. “We’ve been able to keep everyone. We took advantage of the PPP (Paycheck Protection Program), it was my duty to seek it out because everything was so uncertain,” he said. “It helped us keep everybody on and without it, we were prepared to sacrifice some profits to keep our staff employed.” MSI doesn’t have plans at this time to pursue a second round of PPP funding.

In talking about the proposed change in the minimum wage, Palacio doesn’t think it will impact his company directly, at least initially. “I think it will push all the pay rates up and the ones we have here making over $25 per hour, they’re going to expect that figure to go up over time if the bottom pay rate goes to $15 per hour,” he said.

When the nuclear plant construction at Jenkinsville was still in progress, welders made $38-$40 per hour. “We couldn’t get any welders because they were paying that kind of money. When the whole project shut down, all of them were out of work,” Palacio said. “Applicants would come to us and put down that same expectation of pay, but we couldn’t meet it. It took about six months for the local population to accept that $25 per hour was the going rate. Companies from out of state were paying that kind of money and it was hurting us, but I’d have to believe paying wages that were too high contributed to their collapse.”