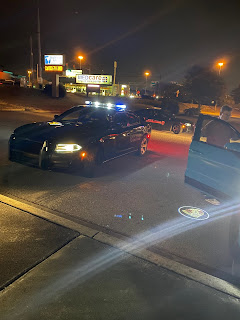 Real Estate School of South Carolina owner Chip Browne stopped his vehicle from being stolen on Thursday night by catching the would-be thief in the act.

After finishing his evening real estate license course livestream, he was shutting off the lights in his building on Medical Circle, across from Lexington Medical Center around 9:30 p.m. As he approached the front door, he noticed that the lights were on inside his new SUV as well as the headlights. The passenger side rear door was also open.

He rushed outside and found a male suspect inside the back of the vehicle, rummaging through the items on the back seat. He confronted the man, asking him what he was doing in his car. The suspect didn’t have a good answer and somehow Browne was able to convince him to come inside the business. On the way back to the front door, Browne noticed that weapons were piled up on the front seat.

He called his wife to come back to the business and assist him with the suspect. She called the West Columbia Police Department to respond to Browne’s location and hurried to their office. Upon arrival, she found her husband’s vehicle with all of its doors and hatch open and Browne with the suspect inside the front lobby, the suspect with his hands in the air. Shortly thereafter,  the first officer from the West Columbia Police Department arrived to take over the scene.

The suspect had several hundred dollars belonging to Browne in his pocket, which he turned over after being questioned. The quick and professional response by the West Columbia Police Department impressed Browne, who said, “I really appreciate all that they did and how fast they got here. It could have turned out very differently. I don’t understand why the man didn’t immediately run away or be more confrontational with me, but he didn’t. I’m just really lucky right now.”