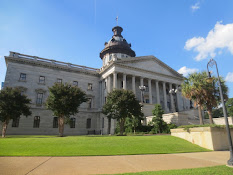 Columbia Police Chief Skip Holbrook said in a statement there will be a police presence at the State House in Columbia on Inauguration day, Jan. 20.

But Holbrook did not say who police would target in their "intelligence-gathering" effort.

The Holbrook statement is below:

The Columbia Police Department is working with state and federal partners to monitor and engage in intelligence gathering related to events leading up to and including Inauguration Day 2021.

We will have a multi-agency security plan in place for all planned or spontaneous events. CPD is also monitoring social media, human intelligence and other open information sources regarding planned upcoming events.

Additionally, CPD has received communications from the Federal Bureau of Investigation (FBI) through the South Carolina Law Enforcement Division’s (SLED) Fusion Center as part of the daily intelligence briefing.

City of Columbia citizens can expect to see high visible police presence on and around the South Carolina State House, or other identified protest locations as events are announced or detected. Other law enforcement partner assets, such as mobile field force, hazardous device units, aviation, and tactical teams will all be available for our consideration.