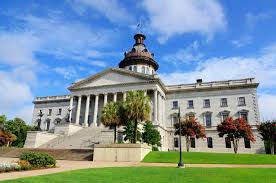 South Carolina house member R. J. May (R – Lexington County District 88) filed a bill this week proposing that a president who has been twice acquitted of impeachment may be buried on the State House grounds in Columbia, South Carolina.

This bill is aimed at giving former President Donald Trump a place for his burial when the time comes and is filed in response to an effort being made in the United States House of Representatives to ban twice impeached presidents from being buried at Arlington National Cemetery.

President Trump was acquitted after each impeachment attempt.

Representative May posted on his Facebook page, "Are you familiar with H 484? It's a bill introduced in Congress that would prevent 'twice impeached' presidents from burial at Arlington National Cemetery. Today, I introduced legislation to give twice ACQUITTED presidents the honor or being buried on South Carolina State House grounds, should they accept."

Currently, there is only one person buried at the South Carolina State House. Swanson Lunsford, a captain in the Revolutionary War, died in 1799.