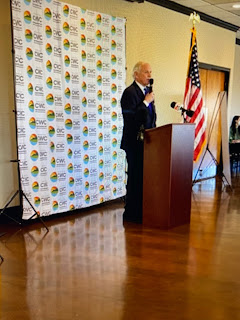 Governor Henry McMaster (R - SC) spoke to a full capacity gathering of the Greater Cayce - West Columbia Chamber and Visitors Program at Stone River this morning. Several local elected officials were in attendance, including Tem Miles, Mayor of West Columbia, Danny Summers from Lexington County Council and Tim James from Cayce City Council and President and CEO of the Chamber.

Hayley Bowers, chairman of the Chamber board, began the meeting followed by the invocation and pledge of allegiance. After the presentation of two awards by the Chamber, Councilman Tim James introduced McMaster.

The governor’s remarks were wide-ranging, focusing on the state of COVID restrictions, the vaccine rollout, tourism and the business climate in South Carolina.

“South Carolina’s business is primarily small business, but we also have huge manufacturers. They could go anywhere in the world, but they are choosing South Carolina,” McMaster said.

“Why is that? Is it because we have the best technical college system in the U.S.? No, it’s the people. In South Carolina, the people present the best there is for dependability, quality and determination,” he said.

McMaster lauded the military and Judeo Christian culture of the state, emphasizing that the environment is something very special.

Transitioning to the COVID crisis over the past twelve months, McMaster praised the state’s approach to maintaining operations for most businesses. “Business is essential, you can’t close down these businesses. Some states closed down and they stay closed down. I don’t know how they are ever going to get out of their hole,” he said.

“We took a different approach. We put together a group called Accelerate SC and we determined a path to follow and we did it. Rather than figure out what is essential and non-essential, who’s to say what’s essential? We looked at the science and the type of conduct most likely to spread and put limits on that, such as beauty shops and barber shops, concerts and the like,” he continued.

McMaster referenced shutdowns of major manufacturing in other states, including the temporary closure of automobile manufacturing in 2020 during the height of fear of increasing infections. “A shutdown in Michigan affects us here. Even now, a big order of vaccines comes in every week and bad weather in Kentucky delayed a recent shipment,” he said.

According to the governor, the state’s approach to COVID restrictions was to restrict as few activities as possible. “It worked. Our unemployment rate is one of the lowest in the United States right now. Some businesses have been hurt but we are trying to help now. Small business is the essence of South Carolina,” he offered.

“Out of the $1.9 billion in the CARES Act, we put half of it back into the unemployment trust fund so we wouldn’t have to raise taxes on businesses,” he added.

South Carolina had an additional $40 million in funds from the CARES Act that was distributed to 2,284 small businesses recently. The state received 12,000 more applications for assistance, but was not able to fund these requests due to a lack of funding.

McMaster wants to give $60 million for the state’s technical colleges to retrain workers with certificates for fields needed now and in the future.

Another focus for the state is to add programs and eligibility for 4k pre-kindergarten programs to more areas in South Carolina. “Sixty one school districts provide it and we have others that don’t, so I want to provide money for that to happen so that every child that falls below the poverty line is able to attend,” McMaster said.

He is also pushing the state legislature to pass a bill requiring all state schools to open for in-person learning immediately. “We knew from the beginning, the people in danger were the old people with underlying conditions. Well, nothing has changed, so what we have done in Phase 1A and included in there are vaccines for 70 and older, then 65 and I’d like to move it down to 60 for vaccines. The average age of people who have died in South Carolina is 75. Eighty eight percent of those who have died are 61 or older. Why would we want to put young healthy people in front of older people that may get sick and die?” he asked.

“There is no spread in the schools; very little, almost none from students to the staff and teachers. In Charleston, the pediatric epidemiologist there said she was stunned to see that result. The CDC has said the schools that use all the PPE, that is one of the safest places people can be,” McMaster said.

The governor said the state’s intention is to utilize every pharmacy and hospital for vaccine delivery.  With approximately six hundred pharmacies and almost fifty hospitals, there will be ample access to vaccination sites.

Tourism is important to the South Carolina economy and McMaster wants to promote the state as a tourist destination.

“We were an outlier last year,” he said. “NASCAR wanted to race at Darlington last year, but several of the garages in North Carolina were closed and the teams couldn’t get access to their cars and supplies. I called Roy Cooper in North Carolina and asked if he could let the NASCAR garages open and get their cars to South Carolina to race. We have the PGA coming back this year with the Heritage, so our tourism industry is superlative.”

Famous musician Darius Rucker has been selected as a spokesperson for South Carolina’s tourism industry. McMaster described an ad created with Rucker, “Darius says, ‘come see why I love this place’ as he rides around in his convertible with his guitar sticking out.”

When asked about the poor condition of the state’s roads and why the billions received in road tax revenue haven’t been used to make repairs, McMaster deferred to the state’s Highway Commission.

“We’re playing a little bit of catch up with the roads and didn’t have the contractors, they’d gone to other places to start projects. The Highway Commission and Secretary Hall are as good as they come and it’s just a matter of time,” he said without committing to any timeline for repairs and maintenance.