Who's Left in the Media That You Can Trust? 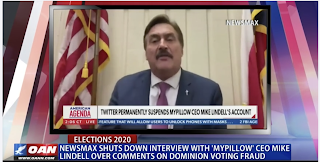 Immediately following the 2020 election, a number of conservative Americans became totally disillusioned with Fox News, which had long been a favored source of information.

For the first time in more than twenty years, Fox was beaten by its competitors in key ratings demographics and Greg Kelly’s show on Newmax at 7:00 p.m. EST beat Martha MacCallum’s show on Fox News.

Yet even with Newsmax’s newfound success, they’ve allowed the same strategy that brought them to prominence and damaged Fox News to seep into their own programming.

On Tuesday, February 2nd’s edition of “American Agenda,” Newsmax co-anchor Bob Sellers was conducting an interview with Mike Lindell, CEO of My Pillow. The irony is thick, as the anchor was asking Lindell about the cancel culture and whether he thought the banning of his personal and business Twitter accounts was going to be temporary or permanent.

Lindell was focused on saying he thinks the Twitter ban is permanent, as he intends to release today evidence he’s collected against Dominion Voting Systems that shows election fraud and that Twitter wants to prevent him from doing so. Instead of letting Lindell speak, Sellers talked over him and the control room at Newsmax saw fit to turn down the volume of Mike Lindell’s audio so that the speech of anchor Bob Sellers overrode him and was the dominant audio, effectively censoring Lindell on live television.

Sellers stated, "We at Newsmax have not been able to verify any of those kinds of allegations," he said. "We just want to let people know that there's nothing substantive that we have seen. And let me read you something.

"The election results in every state were certified," Sellers said."Newsmax accepts the results as legal and final. The courts have also supported that view." Instead of letting Lindell speak any further, Sellers asked his producers to end the interview, but when it wasn’t done immediately, the anchor just got up and walked off the set, live on the air.

While the evening lineup at Newsmax has been forthcoming regarding events and news about the lightning fast change in America’s culture since the Biden administration has taken power, the afternoon show is clearly taking a different view of things.

At least seventy four million Americans voted for Donald Trump and that large block of voters represents a significant part of the country. With mainstream media’s clear hatred of all things Trump, it was a surprise to many when Fox News shifted tone towards the type of language and coverage found commonly at CNN, CBS, NBC and MSNBC. The Newsmax team will lose its newfound viewers quickly if they follow suit.

Censorship is gaining ground at an unprecedented pace. While social media platforms label comments as hate speech, the real agenda is to eliminate speech that they hate. Opposing views are being silenced at an alarming rate as the American marketplace of ideas grows cold. To see a news organization practice censorship in real time, live on the air, is disturbing. If Newsmax allows this type of behavior to stand, who’s left that will honor the real tenets of journalism - to report without bias?