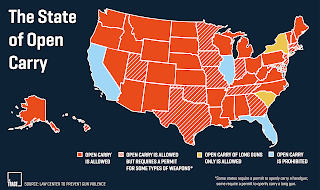 The South Carolina House of Representatives passed the first major Second Amendment legislation in over 25 years. Forty-five other states have adopted firearm legislation similar to this bill. The "Open Carry with Training Act" is a critical step in bringing South Carolina in line with a vast majority of the country, including every neighboring state.

This bill (H.3094) allows individuals to openly carry handguns in SC, so long as they have a valid conceal carry permit (CWP). This advancement is good for safeguarding Second Amendment rights. Next up is the Constitutional Carry bill (H.3096). This bill has moved out of committee and will receive a House vote in a couple of weeks.

Representative Bill Taylor, House District 86, was a target of two gun-rights advocacy groups prior to the vote on the Open Carry bill, even though he is a supporter of the initiative. Taylor said, "My colleagues and I have each received hundreds of emails and phone calls triggered by these advocacy groups. I believe they purposely confuse the issue to stir up their followers. In reality, they are using these gun bills to raise money for themselves."

Taylor was a co-sponsor of both H.3094 and H. 3096. "Important legislation takes thoughtful strategy, not blunt force. My voting strategy is to advance gun rights, not kill them. We did just that this week in the House — we advanced. The Constitutional Carry bill will get my vote in a couple of weeks," Taylor confirmed.