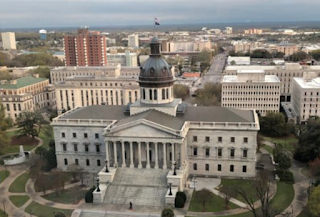 In an attempt to save South Carolina from the wave of socialist-leaning trends sweeping the country, several legislators at the South Carolina state house are working to put laws in place to impede their progress.

With President Biden’s 52 executive orders issued to date, the traditional process of creating laws is being thwarted daily by an executive overreach of power.

Representative Bill Taylor from Aiken’s District 86 plans to file the Pushback Agenda at the state house this week. The impetus behind this filing is to cancel the possibly illegal executive orders from having any enforceable impact in the state of South Carolina.

Taylor regularly sends out an email newsletter to his supporters and constituents. In the latest edition, he stated, “This isn’t a Democrat of Republican issue – it’s a big government, big tech issue. In Washington, the three branches of government are a myth. The executive branch showers we lowly ‘subjects’ with executive orders while federal bureaucrats thrust down strangling regulations. The legislative branch (Congress) squabbles among themselves, wallowing in raw politics. The third branch, the federal courts, have become highly politicized and fail to be impartial referees using the Constitution as their guidebook.”

If enacted, the Pushback Agenda would require the South Carolina attorney general Alan Wilson to review the constitutionality of presidential executive orders as they pertain to enforcement in the state.

A plethora of bills are part of this Pushback Agenda and include many legislative co-sponsors. Of particular interest is H 3217: Vaccines are Voluntary. From the bill, “to amend the Code of Laws of South Carolina, 1976, by adding section 44-29-45 so as to allow individuals to opt out of infectious or contagious disease vaccinations for any reason; and to amend section 44-53-360, as amended, relating to prescriptions, so as to prohibit regulatory authorities from interfering with the prescribing practices of a practitioner.” With the hard push from the federal government on the COVID-19 vaccine, many people are being pressured to take the vaccine. And, employers are either mandating or ‘strongly encouraging’ employees to take the vaccine.

A person should have the right to refuse a medical treatment that goes against his or her wishes for any reason.

Another bill filed is H 3218: Voiding Federal Face Covering Mandates. From the bill, “to amend the Code of Laws of South Carolina, 1976, by adding section 44-29-55 so as to prohibit state officials from participating in the enforcement of any unlawful federal mask mandate that violates the tenth amendment of the United States Constitution, to establish penalties, and for other purposes.”

Overreach at the state level has also become common during the last twelve months, with governors and mayors across the country exercising emergency powers in a manner inconsistent with the prescribed use of such powers.

Governor McMaster has operated under several continuous state of emergency declarations, going as far back as March 13, 2020.