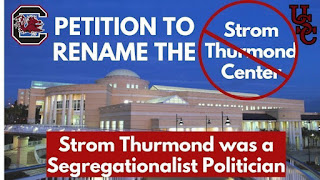 In yet another show of cancel culture, the student government at the University of South Carolina's main campus in Columbia is pushing to rename the Strom Thurmond Wellness Center. While this effort has been made in the past, there's a fresh attempt to convince the USC Board of Trustees to take action.

As of this writing, the petition created at change.org has 20,225 signatures with a goal of 25,000. Heather Armel started the online petition, saying, "This petition is to rename the Strom Thurmond Wellness and Fitness Center at the University of South Carolina. I am an alumni of this University and am embarrassed after a quick Google search of the name of one of the most frequented buildings on our campus.

"Although Thurmond was known for other things outside of his racism, we can not put racists on a pedestal or on the side of buildings if we want to become an anti-racist University and student-body."

She goes on to enumerate several significant points in his career, focusing on his years in public life from 1954 onward when he opposed civil rights efforts.

Thurmond was South Carolina's longest serving senator and the senator with the longest tenure period until being surpassed in July 2020 by Senator Robert Byrd.

Other colleges and universities across the country have taken action to remove the names and likenesses of historical figures from their campuses in a move to eliminate any relationship with persons viewed as racist. Other named USC locations targeted for rebranding include Sims at Women's Quad and the Wade Hampton Women's Dorm.